Herkimer Diamonds allow you to effectively release negative energies, fears, and anxieties. They can even be used to clear unconscious fears and repressed energies. This allows for a complete and total relaxation and expansion of life energy.

While the Herkimer Diamond is most commonly used to resolve and clear emotional blockages, it can also be used to release and remove toxins from the body.

Just like Clear Quartz, when combined with other crystals, Herkimer Diamond will considerably increase their performance.

The Herkimer diamond is a form of double pointed Quartz Crystal that has already been faceted by nature. Having two points at the opposite ends is also known as double termination. This changes the Herkimer Diamond meanings and uses of the crystal.

Double termination is relatively rare and these are sought after stones for their healing properties. They are often also more valuable and more expensive than comparable single terminated crystals.

All double pointed crystals can be used to balance the polarities between any two aspects. Herkimer Diamonds are especially suitable for this purpose and the effect is further magnified by the double pointed shape having formed naturally.

For example, Herkimer can be used to achieve a balance between:

There are two types of Herkimer diamond which have slightly different meanings:
– Clear Herkimer Diamonds consist purely of Herkimer
– Included varieties have traces of black carbon mixed with Herkimer

Herkimer Diamonds have a very high vibration and extremely sensitive people can experience this as almost too intense. In the beginning, this can cause some disorientation and dizziness. These effects usually dissolve quite quickly on their own.

This can also be easily managed by using an included variety of Herkimer. The trace elements of black carbon are very effective at grounding and anchoring. This will resolve the disorientation and allows even hyper-sensitive people to enjoy the benefits of Herkimer Diamonds.

The black carbon does not necessarily need to be within the Herkimer Diamond. You can also use a clear Herkimer Diamond and use a separate dark colored crystal, such as Onyx or Hematite, to achieve the grounding and anchoring effect. 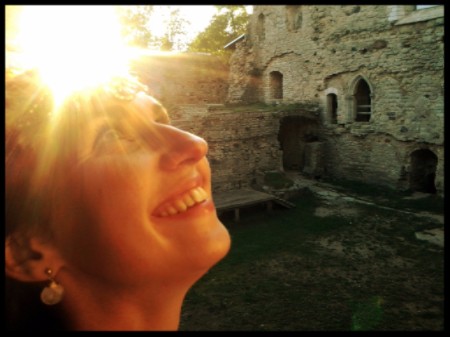 “Herkimer is effective at making rigid structures more flexible and enables us to open our eyes to see things in a new way. This works marvellously when we find ourselves holding on to our preconceived notions and rigid ideas.

Herkimer encourages us to be more flexible, to relax, and to take more responsibility of our own wellbeing.”

Herkimer Diamond Meanings at a glance

With its wide range of effects, Herkimer Diamond is a great all-around stone to wear as jewelry. Check out my jewelry collection to see how they look.

Next, we will be learning about the meanings and healing properties of Hematite. To be notified when the next part of this series is available, simply fill in the form below.

"I have been suffering from lightheadedness for a long time. I intuitively bought Creativity Activator earrings by Sigrid M Leis, as I simply liked their appearance. After wearing these Herkimer earrings for only a couple hours, I noticed getting clearer and more balanced.

As you feel the protection of Herkimer, it enables you to relax in the present moment. This allows your mind to expand in many directions and makes you more attuned to your senses and what you really want to do and achieve.

The effect of Herkimer Diamond is further balanced with a Clear Quartz Crystal bead located near the clasp.

Three Golden Stars and a Satellite on Orbit Necklace

This necklace combines plentiful Hematite beads with Herkimer Diamonds for a powerful boost to your creativity.

The three golden suns give warmth and make you feel rich, secure, and successful. They remind you of your true potential and the abundance you can enjoy.

These beautiful Herkimer earrings are like treasures. They are perfect for assisting with ‘new beginnings’ and manifesting your heart's desire with confidence and ease.

As you feel the protection of Herkimer, it enables you to relax in the present moment. This allows your mind to expand in many directions and makes you more attuned to your senses and what you really want to do and achieve.